Our Annual Working Tests were once again held this year on the land of Birr Castle Demesne, on Sunday 14th April 2013, by kind permission of the Derrinsallow Shooting Syndicate. We were extremely well sponsored by Jon Binley, Massbrook Petfoods and Agent for Sporting Saint, Open Season and John Keane C & K Sporting Products. Judges for the day were Club Chairman Pat Brennan and Willie Edgar, both who have proved to be extremely well accomplished Judges and Handlers. They had a total entry of 13 Puppy, 15 Novice and 16 Open dogs to look at for the day.

The day began with Pat Brennan making a presentation of a new set of Armbands to the Club kindly sponsored by his kennel “Clodahill Spaniels”. 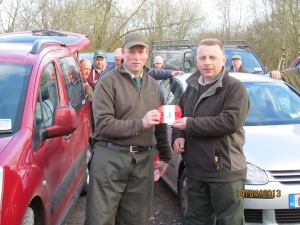 Weather conditions were not ideal for the day with some heavy showers and strong winds, however we battled on and all the dogs were given the chance to show themselves off in the rushes by being hunted into the wind in all the events. The Judges didn’t need to see dogs doing “Circus tricks” and so kept everything simple. At the end of the day 3 dogs were called for a run off for Best Hunting Spaniel, Sean Moriarty’s – Tearsol Flash, Mick Walsh’s – F.T.Ch.Hollydrive Theo & Vinnie Cauldwell’s – Gardenrath Princess, who incidentally is a daughter of Tearsol Flash by Echobay Twilight Dancer.

Before the presentation we ran our Raffle which as always was very well sponsored and supported.

The Hon. Secretary then announced the various Winners as set out below.

The Club would like to pass on our gratitude to anybody who helped and supported us on the day and to all who sponsored spot prizes for our raffle, with a special thank you to Seamus Pierce and the Derrinsallow Syndicate.

Ed McAuley & Tom Hayden in action in the Novice Test

Kate Gordon waiting her turn in the Puppy Test

The Gallery brave the elements

Vinnie Cauldwell looks on in anticipation

The Judges issuing instructions for the Novice Test