This Open Stake was held on Sunday January 6th  2013 on Ilaunmore by kind permission of Mr.Michael Manke.  Judges for the day were Mr. Tim Crothers (A), Mr. Tom O’Connor (A) and Mr. Tony O’Brien (C). The Steward of the Beat was Mr. Vincent Kyne who lead us to the shoreline for our day of sport. We were yet again very well supported for the trial by competitors, spectators and our sponsors Massbrook Petfoods.  The January pheasants were doing a lot of running and it became increasingly difficult to catch up with them. The winner was presented with the North Tipp. Working Gundog Club Perpetual Cup and the Guns Award. Mick Walsh in second place was also celebrating making his young dog Hollydrive Kurt up to a Field Trial Champion. Congratulations and well done to everyone in the awards.

Willie White with some of the gallery in the background

A lot of the Gallery deep in conversation 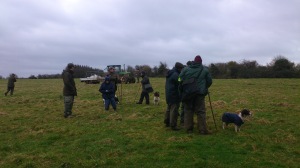 Does Hilary feel Blessed amongst men 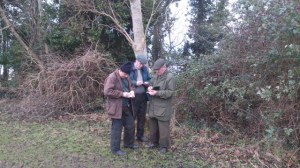 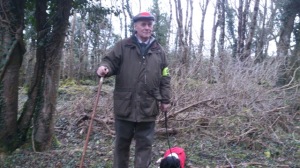 Willie White and FTCh Clodahill Fern look on in anticipation

The following pictures are courtesy of  John Daly.

This entry was posted in Uncategorized. Bookmark the permalink.
Loading Comments...